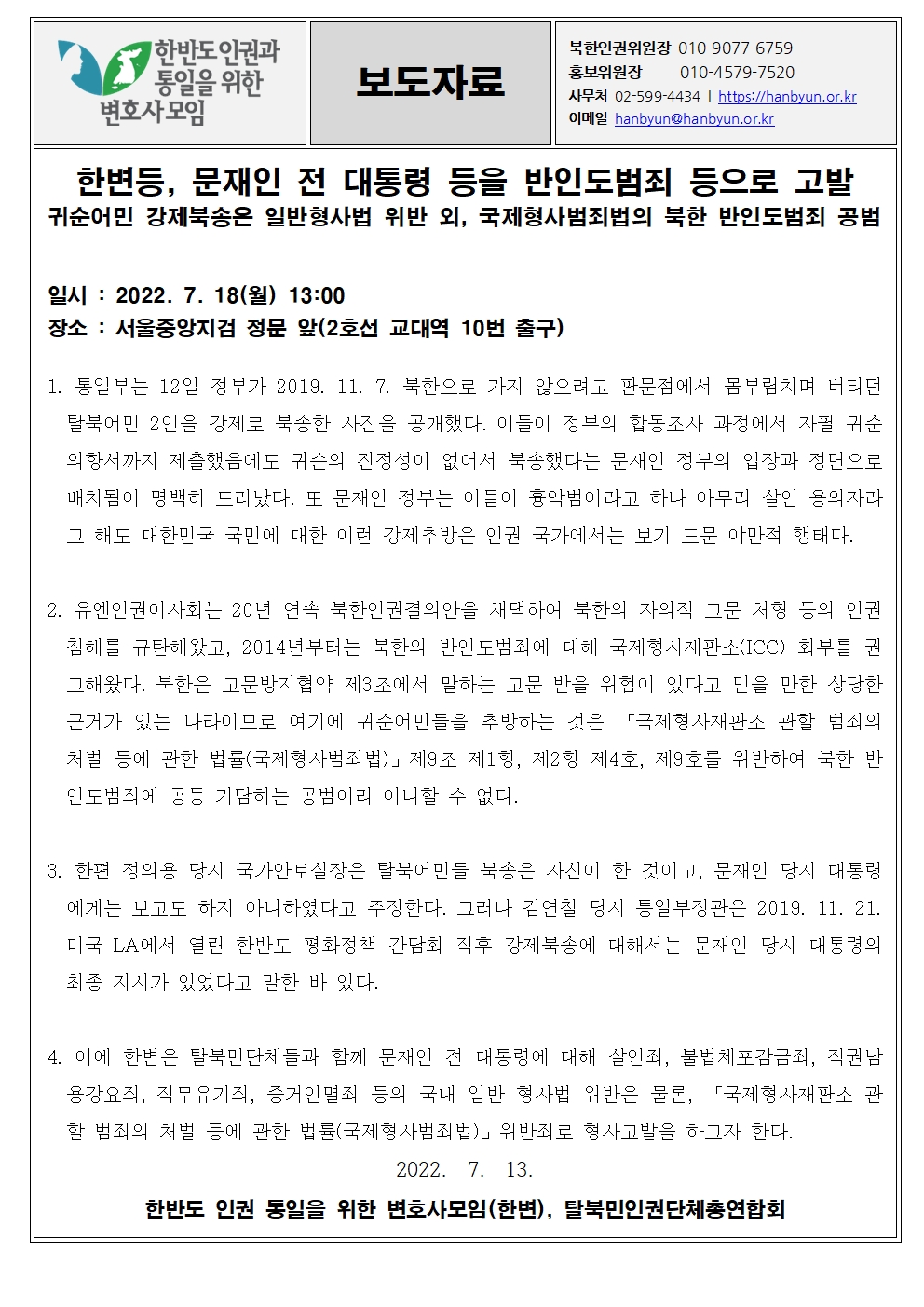 The Lawyers for Human Rights and Unification of Korea (LHUK)

Venue: At the entrance of the Seoul Central District Prosecutor's Office

1. On July 12, 2022, the Ministry of Unification released ten photos taken on November 7, 2019, at the scene of expatriation of the two fishermen who defected to the Republic of Korea during the Moon administration. The photos provide graphic details of the extradition from the moment the two fishermen arrived at Panmunjom until they were handed over to the North Korean soldiers. The two fishermen had submitted a declaration of intent to defect to the Republic of Korea in their own handwriting, which shows that the Moon administration's announcement made in 2019 that these two fishermen had denied any intention of defecting has proved to be false. In any case, the extradition cannot be justified because North Korean defectors were citizens of the ROK under the Constitution of the ROK.

2. The United Nations Human Rights Council has adopted resolutions condemning North Korea's human rights abuses for twenty consecutive years. Since 2014, the UNHRC has urged to bring the human rights violation cases committed by the North Korean government to the International Criminal Court (ICC). Under Article 3 of the United Nations Convention against Torture, North Korea is construed as one of the nations that

3. Chung Eui-yong, former President Moon Jae-in's first Director of National Security, asserts that the decision to extradite the defectors was solely made by himself and was never reported to former President Moon. Nonetheless, Yeon-chul Kim, former Minister of Unification, stated on November 21, 2019, that then-President Moon was briefed on this matter and made the final call on the extradition after the Conference on Peace on the Korean Peninsula that took place in Los Angeles.

4. LHUK, alongside various North Korean defector organizations, has decided to bring a criminal charge against former President Moon on the grounds of murder, illegal arrest & abduction, abuse of power, destruction of evidence, and violation of the Act on Punishment of Crimes under Jurisdiction of the International Criminal Court.